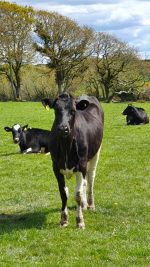 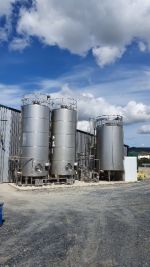 Saint Beuno was a 7th-century Welsh abbot, confessor, and saint who lived in North Wales in the 7th century and founded a monastery on the beautiful Llyn peninsula. After his death farmers would bring their calves to his tomb to ensure they were strong and healthy.  It was in this location that  the aptly named St. Beuno’s Dairy decided to establish itself.

A new dairy is not normally news except for the fact that this is a dairy with a difference; St. Beuno’s Dairy believe that their craft “miraculous Welsh milk tastes heavenly” for a number of reasons.

On a prosaic note, two features immediately spring to mind;  All St. Beuno’s products are only available in fully recyclable glass bottles.  When the bottles are empty, don’t throw them away. The hygienic, sealed screw-top lids mean that the bottles are ideal for storing homemade drinks, soups or sauces

The second noteworthy item is the actual range of drinks being produced. The core products are sterilised milk and also craft chocolate and flavoured milk drinks. For instance currently all chocolate milk is being imported from the continent which can be problematic for the supply chain.  This is not chocolate milk shake often found in plastic bottles in the chill cabinet – but sterilised chocolate milk that does not need refrigeration and can be stored for months in the cupboard (see bottle for details) – you can taste and mouth feel the difference.

The sterilised milk being produced is naturally slightly sweeter than pasteurised milk and is ideal for cooking and baking too. Pure Sterilised Milk is Available in Whole, Semi-skimmed and Skimmed. Visit their website for more details;  http://st-beunos-dairy.co.uk/

The sterilising process for milk that is being used is the only one of its kind in the UK. Sterilised milk is cow’s milk which has been heat treated to give the product a longer life. The milk is sourced entirely from British cows and bottled at the dairy in North Wales and is a 100% natural dairy product with no additives and is nutritionally identical to fresh milk. 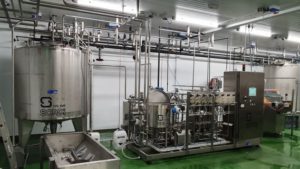 Support was given by a number of bodies including the Welsh Government Food and Business investment Scheme. A suitable technical partner was required to develop a working factory site plan and also supply and install some of the equipment.  Enterprise Tondelli have worked together with St. Beuno’s since 2016 to bring their plans to fruition and are excited by the new launch.

Craig Wilson Managing Director of Enterprise Tondelli UK stated “over this period a number of possible sites were looked at and developed together with St. Beuno’s before the current site was selected. The location, provenance, history and also possibility for expansion made the final site ideal. We have enjoyed the journey with St. Beuno’s.”

As part of the overall project Enterprise Tondelli supplied a special flash pasteuriser unit with a number of different treatment profiles depending on the product. Two sets of holding tubes allow the different holding times accessible by a flow plate. The four section plate type heat exchanger was also configured for maximum  thermal regeneration to save energy. Processed milk is then sent to a sterile buffer tank supplied by Enterprise before filling. Additionally, to ensure a standard product a high pressure homogeniser (250 bar) was incorporated as part of the scope to give an integrated solution. Whilst the customer has their own CIP set for the tanks etc, Enterprise supplied an onboard CIP system for the flash pasteuriser and buffer tank too for sterility. To make operation easy a large touch screen shows all the operations and settings of the unit was supplied. The system was also made modular so that future diary products can be produced such as the addition of a separator etc..

The system was fully tested before despatch from Italy at the manufacturing plant of Sordi Srl in Lodi who have been supplying equipment to the dairy and juice industry since 1909….. In fact, Enterprise have partnered with them for many years on a number of dairy projects; the first being a turn key sweetened condensed milk processing and canning project in Bangladesh in 1989.

Additionally, as part of the packaging line Enterprise designed the layout with hygiene in mind along with ergonomics and labour optimisation. A bulk glass depalletiser to reduce manual handing and potential contamination of the bottles by operator intervention was supplied from Enterprise. Space was also allowed for potential returnable glass bottles in a future phase with the introduction of a bottle washer.

Mr. Tim Kearns who is the founder of St. Beuno’s said “it has taken some time and we have been able to overcome the many hurdles that come with setting up a new venture especially in the dairy industry where there is much regulation. However, with the continuing support of Enterprise we have got there. One of our consultants said the equipment from Enterprise was one of the best bits of kits he has seen”.

Enterprise Tondelli have been supplying beverage bottling canning and packaging lines since 1977 and have worked in over 40 countries. They supply from single machines to complete turnkey factories for the beverage industry whether it be spirits, beer, carbonated soft drinks, water or dairy from 20 container per minute to 1200 containers per minute – and all sizes in between.

Further case studies from returning customers and the Enterprise Tondelli full range of equipment and services can be found at www.enterprisetondelli.co.uk 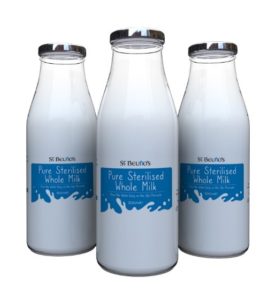