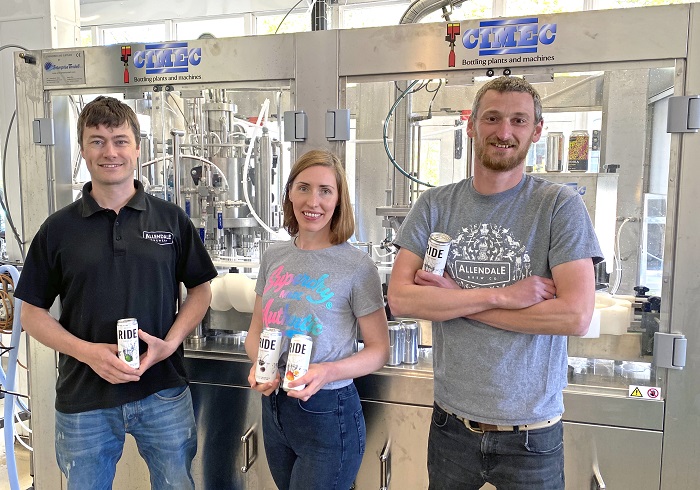 A former lead smelting mill located on the banks of the river Allen in the North Pennines,England’s Last Wilderness, is the home of Allendale Brewery.  They are the first company in the UK to start producing and canning their new brand ‘RIDE’ Hard Seltzers all in house.  Allendale brewery was registered in 2004 by Tom Hick and produced its first beer “Curlews Return” on Valentine’s day 2006. Tom now runs the business hand in hand with his wife Lucy and head brewer Neil Thomas, who joined the team in 2009 along with the rest of the team which has grown to match the success of Allendale Brewery.

The hard seltzer success story is a masterclass in savvy branding. Having burst onto the scene in 2016, in just three years hard seltzers have become the fastest-growing alcoholic drinks category in the US, with the sector predicted to be worth US$2.5 billion by 2021 and due to triple in size by 2023.

After hearing from some friends in the United States about an amazing new drink that was taking the country by storm, Tom and Lucy thought ‘we have to try this’. The drink in questions was Hard Seltzer: a refreshing, natural fruit flavoured, alcoholic sparkling water which is low in calories, gluten free and vegan friendly, and not sweet and sugary!

At the time there was none available in the UK, so they had some sent over from Miami and as soon as they tasted it, they were sold! That first box did not last long! In fact, they thought it was so good they should have a go at making their own.

Many nights were spent mixing flavours and trialling different techniques until they hit upon the formula. Tentatively sharing the new creation with friends and family and their feedback was resoundingly positive and immediately followed up with ‘where can we get some more?’

RESPONSE TO DEMAND FOR HARD SELTZER

And so, Ride Drinks was born. Alcoholic sparkling water with a hint of natural fruit flavours. No artificial flavourings or sweeteners, just great taste. Incredibly refreshing and delicious and with only 86 calories! Black cherry, Persian lime, Mango and Passion fruit and Blood Orange are available in eye catching 330 ml sleek cans.

The natural package for the hard seltzer is a can, which has many environmental benefits. To have control of the entire process in terms of quality control and production flexibility and to allow both the new Hard Seltzer and their existing range of craft beers to be canned in-house a new canning line was purchased from Enterprise Tondelli.

The new can line includes a rotary counter pressure can filler from Cimec, Italy. The six filling head and single head seamer are monbloced on a stainless steel base frame. On the worm screw of the can filler CO2 is used to pre purge the cans of air followed by purging as the cans are sealed against the filing valve on the carousel. The purging CO2 is from a separate manifold to ensure the CO2 is always fresh – a feature normally only found on the very large can fillers. Using a counter pressure filling valve evolved from a long established bottle valve ensures dissolved oxygen control and allows high carbonation products to be filled. The seaming chucks are made by a specialist company and are mounted on a turret what is controlled by an inverter controlled motor with a mechanical cam to ensure repeatable seaming. A controlled area for liquid Nitrogen injection for still products was also incorporated. To complete the Enterprise supply a conveyor system and ink jet coder were supplied.

COMMENTS FROM THE PROJECT TEAM

Tom said “ I first met Craig Wilson from Enterprise in 2009 who has followed our project for us. As we are a smaller brewery the attention to detail, long experience of Enterprise and flexibility has been very helpful. The new canning line is also very simple to use and when things go wrong it’s not rocket science to fix.  The level of support from the manufacturer has also been excellent“

You can now find their beers across the country in cask, keg, bottle and can. Check out their online shop for their Ride Hard Seltzers and very wide range of beers:-  www.allendalebrewery.com and www.ridedrinks.com.

Established over 40 years ago Enterprise Tondelli supply craft can fillers 1,500 and 3,000 cans per hour including depalletiser, can rinser, labeller etc to make a complete line. They also have a range of high speed flow meter can fillers from 12,000-80,000 cph as filler/seamers only or as part of a complete can line supply. READ MORE CASE STUDIES AT https://www.enterprisetondelli.co.uk/case-studies/