Glen Catrine Bonded Warehouse Ltd. (established 1974), is now the largest independent bottling plant in Scotland, but was originally created to bottle whisky for their own chain of retail shops. Its current annual production is in excess of 36.5 million bottles of whisky, vodka, gin, rum and brandy. Amongst a multitude of brands, they produce the 5th highest selling whisky in the UK (High Commissioner Scotch Whisky) and the 2nd highest selling vodka in the UK (Glen’s Vodka). They also bottle Whisky, Rum, Brandy, Gin & Vodka for many of the leading “private” labels available in a variety of multiple retail outlets. 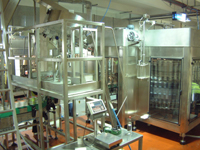 The group also own Loch Lomond Distillery (established circa 1814) which is a unique blend of the old and the new. Originally purchased in 1985 to ensure an adequate supply of malt whisky for the bottling plant, Glen Catrine have since invested in excess of £15.5 million in new Malt & Grain stills and new warehouses. It is currently the only distillery in Scotland that produces both grain and malt whisky on the same site. The average annual production is 10 million litres of grain alcohol and 2.5 million litres of malt alcohol, the equivalent of 43 million standard bottles of whisky every year. The average stockholding is in excess of 50 million litres of scotch whisky, making them the second largest family owned Distillery in Scotland. They also own two other distilleries, Glen Scotia and Littlemill. Glen Scotia, which resumed production in 1999, is one of only two Campbeltown Distilleries that remain in production. Being a privately owned family company, they seek to enter long-term relationships with their customers

Due to continuing and sustained growth in sales a decision was taken last year to upgrade one of the filling lines with a faster and larger filler. A suitable partner for the project was sought and Enterprise Tondelli who have been supplying from single machines to complete turn key projects for over 28 years was selected. These have included projects with filling machine monobloc rinser/filler/cappers with a few as 16 valves up to 140 valves and all sizes in between. One of Enterprise Tondelli’s manufacturing partners in Italy is “Metalnova Spa who have been building fillers on a continuous basis since 1981. In fact one of the very first fillers built by Metalnova was sold by Enterprise in the Middle East for filling cordial drinks.This machine is still in operation after 23 years and running very reliably and in excess of the original contract output.

However the latest development in fillers from Metalnova called “BASELESS – suspended technology” was selected. BASELESS is not only a patented system but a new way of thinking, design and manufacture introduced by METALNOVA into the bottling world.

The BASELESS philosophy allows construction of machines similar to a real filling room. All carousels are suspended from the ceiling and the total absence of moving parts under the bottles assures good hygiene with easy and thorough cleaning and unrestricted access for the machine operator.

The “BASELESS” system is applied to all rinsing, filling and capping machines manufactured by METALNOVA S.p.A. Although developed to improve the performance of machines for PET, the design is now implemented on equipment for glass as well.

intervention by the machine operator due to the easy access. Due to the free space design there are no machine stops due to broken or damaged bottles. An enhanced neck handling system allows quick  change over for PET bottles and for glass the quick change over system requires no tools. Direct gearing is used throughout the machine thus avoiding “play” experienced with  other drive systems.

Another benefit of the baseless machine is reduced maintenance time due to the very easy access for intervention and inspections in every part of the machine. There is also access to the drive motor and gear train where the engineer is not in a confined space but able to stand fully upright. A sterile air filtration system for the filing machine enclosure to give a positive overpressure (optional) is positioned outside the machine at low level for easy access

The final major benefit is it’s cleaning and hygiene credentials. This is achieved by no stagnation zones under the bottles, no moving parts over uncapped bottles, sterile air filtration  easy to clean and sterilisable by steam. (optional) and also differential sterile air pressures between the rinsing, filling and capping zones (optional)

Mr.Jaigelko Joint Managing Director of Glen Catrine stated ” we visited Italy looking for a conventional filler. However upon visiting the Metalnova manufacturing works we saw a “baseless” filler for PET under testing. We recognised that the baseless filler was a major improvement on conventional machines and therefore following discussions with the chief designer we placed an order for a unit which is now installed and delivering as per our expectations. ”

The unit is a 30 / 48 / 8 dual purpose blower or rinser/filler/capper. The machine has starwheel transfer between all the carousels, automatic fill height adjustment and  and a 10″ easy to use industry standard touch screen. The unit can handle can also handle 70cl’s,  75cl’s, 1 litres and 1.5 litre glass bottles.

Since the writing of this article the customer has purchased a further two baseless units.