The Wells & Co Brewpoint project is a complete self-contained brewery and packaging facility; conveniently situated and easily accessible on the outskirts of Bedford. It is also an exciting destination for beer and food lovers alike. Enterprise Tondelli are pleased to have been a part of such a beautiful and exciting endeavour. https://www.brewpoint.co.uk/

“Brewpoint is a state-of-the-art brewing facility with the flexibility to produce the styles of beer that consumers are demanding, equipped with the technology and brewing expertise to guarantee consistently excellent beer.” 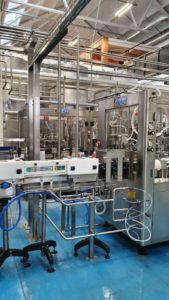 The Wells & Co. concept was to focus on quality over quantity with their beers placing high importance on flavour. The result is a well rounded range of interesting and well crafted beers including a Pale Ale, IPA, Stout and even a Vienna Lager & a Belgian Witbier.

In addition to cask & keg for their large tied & leased estate Wells also wanted a compact and flexible small pack packaging facility. After intense negotiation, Enterprise Tondelli were chosen to supply & commission a combined canning & bottling line. The line was commissioned in September of this year.

The line consists of a rotary Can Filler / Seamer rated at 1500cph, a rotary Bottle Rinser / Filler / Crowner also for 1500bph and a linear labeller fitted with 3 labelling stations for 2000cph/bph. The whole line was engineered by Enterprise Tondelli with conveyors, inkjet coding, hygienic & utilities pipework and power distribution panel. 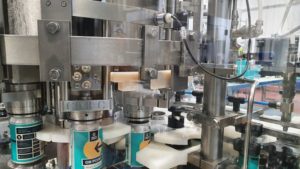 Of particular note is the can filling technology. Unlike semi-automatic linear machines the Can filler is fully automatic and rotary. This gives the benefit of having better control of the filling operation. The can is engaged with the filling head during can purging, filling, snifting / de-pressurisation. The CO2 for can purging is delivered from a separate CO2 manifold thus delivering undiluted CO2 for more effective can purging and thus less O2 pickup. Once the can disengages from the head a jet of sterile water is shot into the can to produce a dense foam which is essential for low TiPO. Experience has shown that some beer types require this treatment. Additionally as the can end is applied there is an undercover gassing system as found on large scale filling machines. 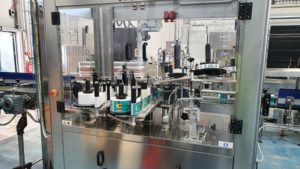 The can seamers supplied are fitted with seaming chucks and rolls from a specialist roller and chuck manufacturer. These are typically made from the very dense ‘Stoody’ metal alloy for superior corrosion resistance with a TiC or TiN CVD coating giving a much longer life and better corrosion resistance than plain AISI440 material. These are mounted using ceramic bearings for low maintenance and full corrosion proofing.

Feedback From The Project Team

Ian Jones, Head Brewer for Wells & Co. said: “We were looking for a small can filler and were attracted to the Cimec machine as the first rotary can filler for beer at this capacity. Whilst it is early days and we are still on a learning curve it has been invaluable in assisting us getting our online shop up and running and I would like to thank Enterprise Tondelli for their superb support in this regard.” 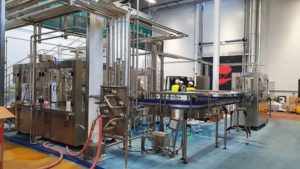 Garry Wilson who managed the Wells & Co. project said “It was a pleasure to work with Ian and his team on this compact line. Wells now have a versatile small pack line that will serve them for many years to come”

Enterprise are currently busy both in the UK and worldwide with projects for all sectors of the beverage industry. Including beers, ciders, spirits, waters, juices and soft drinks.