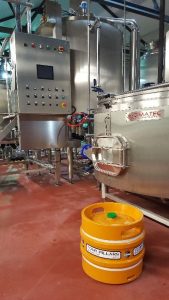 When the four partners of the newly opened Pillars Brewery and taproom in Walthamstow London E17 embarked on their craft lager brewing enterprise they knew that it was imperative to “plough their own furrow”. With so many microbreweries and breweries in the London area producing good ales etc. Pillars Brewery wanted to make their own mark and they have certainly achieved this by producing their “un-traditional lager”.

After three years of investigation with visits to many breweries specialising in Pils type craft lager and many test brews the four partners of Pillars Brewery were ready to take their product to the next stage. Gavin, Eamon, Samie and Omar – the four partners knew that a traditional British mash conversion system would not be the optimum solution to achieve their aims so they started a dialogue and ultimately ordered a turnkey plant from Enterprise Tondelli and their manufacturing partners in Italy Simatec Srl.

Enterprise Tondelli have supplied a number of microbreweries to the craft lager sector in the UK market as part of their activity in the brewing and bottling industry. There are a number of specific features of the brew house that make it very flexible and ideally suited to produce both Pils style lager along with the full range of traditional beers too. 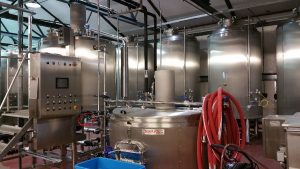 The new brewery was supplied by Enterprise Tondelli as a turnkey project. This included the brew house along with vessels, kegger and all services. The brew house itself is manufactured in Turin by Messrs. Simatec Srl who started some years ago as an aspiring brewer. Not finding the technological solution they wanted in their own brewhouse to achieve the goals of low hot oxidation, increased extract performance, fresh taste profile and low filtration inspired them to start manufacturing brew houses as well. Thus was born the perfect partnership between equipment manufacturer and the brewer’s goals in the microbrewery market.

This partnership has been ongoing resulting in continual development and improvement of the product over time. One recent example is the trend for dry hopping which can cause some challenges for both costings and tank hygiene. Simatec developed the “isobaric hop injector” or IHI for short. This unit utilised with the conditioning vessel reduces hop consumption by around 50-60%, can reduce tank time by 2 days and results in a conditioning tank easier to clean. Full details of this can be found on the Enterprise website. Pillars Brewery took advantage of this device and included one in their project too. 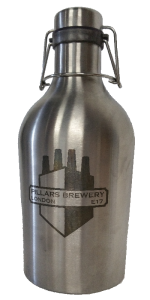 The brewhouse supplied to Pillars Brewery currently one flagship beer along with three taproom specials on regular rotation. The flagship “Un-traditional Lager” is 4.5% and described as a session IPL hoppy lager with a clean finish. The lager is produced adhering to the German purity laws but has an innovative mix of 4 hops coupled with dry hopping in the later stages. Currently the taproom specials comprise of a 4.5% Czech style pilsner called Pillars Pilsner, a 6.2% amber IPL and Citralicious Lager, an un-traditionally unfiltered, dry hopped 4.8% craft lager using lots of Citra hops.

All of the above craft lager is available in kegs within the local area of the brewery and also in very attractive stainless steel “growlers” from the brewery for that ultimate fresh taste, unless you drink straight out of the conditioning tank! For the uninitiated the growlers are refillable take home containers which are filled from the taps in our taproom. It’s a great way to take home fresh poured beer from the range that is served on any given day. Pillars  growlers are made from stainless steel which makes them very strong/durable, easily sterilisable and impervious to chemical reactions with the beer. Unlike glass, stainless steel also prevents the effects of ‘light strike’ which can affect the  flavour of the beer. Pillars growlers have an excellent closure mechanism with a replaceable seal which protects against oxygen ingress.

Kegs were selected for local distribution and the high carbonation enhances the hoppy aroma resulting in very fresh tasting beers – as required. The keg filler is a purpose built keg washer/racker with an on board hot caustic tank for internal cleaning at both high and low pressures to clean both the outside of the spear and also the internals of the keg too to ensure no contamination. Sterility is further enhanced by steam sterilisation.

The Equipment Needed for Craft Lager 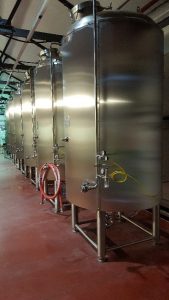 The brewhouse design from Simatec is in fact “un-traditional” too in its configuration. To reduce the hot oxidation the wort is transferred as few times as possible. In all of the size of equipment the wort is only transferred twice even on automatic high throughput plants. One vessel is a multipurpose vessel that acts as the mash tun, copper and whirlpool whilst the other vessel is a lauter which helps increase the extract efficiency thereby saving costs on every brew. This will allow Pillars Brewery to be even more un-traditional in their recipe formulation with fruit beers and even nuts as an ingredient.

Heating for either mashing or boiling the steam jacket on the multipurpose vessel works on low pressure steam with high velocity. This allows greater accuracy of control and very fast and efficient heating. Coupled with special steam pressure temperature control this allows both Pils and stouts to be produced with repeatable results thanks to the automatic controls and preset recipes too. The steam control was especially important for Pillars so they can produce a very high quality Pils with their four hops.

The lauter avoids the use of cutting rakes but rather has floating discs which avoid compaction of the grain. These are activated once the lauter senses that compaction. Transfers are by an inverter controlled positive displacement pump controlled to prevent oxidation. Whirl pooling system does not oxidise the product but gives a very compact trub thus reducing filtration needs and costs further downstream. All of which reduces costs.

All vessels in the tanks fare are Unitanks for maximum flexibility and are sized to allow double batching. Special 0.8 mm internal skins on the tanks mean that the glycol used for cooling has a high velocity for more accurate cooling temperatures and this also means that cooling is much faster giving greater tank utilisation – allowing more batches to be produced. In phase 1 Enterprise supplied 6 double batch uni tanks or dpv’s for maximum flexibility and production. 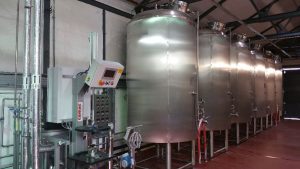 In London the water from the mains is very hard so Pillars Brewery were supplied a water treatment plant by Enterprise Tondelli. Equipped with reverse osmosis so that the water can be “pilsenised” by adding the required salts. A steam boiler along with hot and cold liquor tanks plus a mains water buffer tank due to the restricted site supply mains were also included.

Conscious of their environmental responsibility Pillars Brewery were supplied an “ice bank” by Enterprise Tondelli. The refrigeration system is coupled with an externally located chiller. Traditionally a large chiller would be used on demand but the system supplied by Enterprise generates the “cold” charge over 24 hours using a smaller refrigeration compressor with lower running costs. This is then stored in the ice bank for use over the 30 minutes or so required to cool the hot wort after the boiling cycle. Obviously it is extremely important for the quality of the end product to cool quickly and efficiently. The same ice bank also has an outlet for the fermenting and conditioning vessels making a common system that is partialised depending on load – which reduces running costs. Always with an eye for innovation Pillars Brewery opted for a type of food grade glycol commonly used in the aviation industry. The benefits of this is that the glycol is less viscose and thus uses less energy benefiting their carbon footprint. They are very pleased with the results. Spent grain is also recycled for local livestock feed. 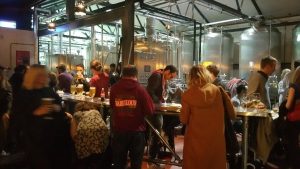 All of the pipework design and supply for the mechanical services was carried out by Enterprise to give a very aesthetic brewhouse and taproom. This is especially important as their tap room which is open on Friday and Saturdays has proved very popular.  (check their website for opening times) Special attention was spent on the lines of sight when designing the brew house so that visitors can enjoy their beer whilst seeing most of the brewhouse enhancing the experience. Live bands also feature on selected nights and during the summer months a pop up bar is planned for the external public areas near the location. 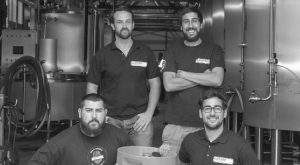 Gavin Litton one of the founding pillars said  “we have appreciated the experience that Enterprise have brought to the project especially with regards to the environment and other areas that a traditional supplier is not so interested in. The equipment from Italy has proved perfect for our untraditional needs and I can see that for other brewers it would have some serious advantages for them. We would recommend Enterprise Tondelli for other brewhouse projects.”

A video of the brewery can be found on the Pillars Brewery website at:- http://www.pillarsbrewery.com/

Craig Wilson Managing Director of Enterprise Tondelli UK stated “ Enterprise is very pleased to have worked with Pillars Brewery on their exciting artisan project. It was very enjoyable to work with the four partners and their tremendous dedication and hard work that they put into the project will certainly serve them well in their future success…”

Enterprise Tondelli supply modular brew houses from 3 hl to 96 hl for up to 12 brews per day along with packaging plants for bottles, cans and kegs . From Single machines to complete turnkey projects